If the Downton Abbey movie and TV series has you fantasizing about life in the elegant and storied surroundings of England’s stately homes, you are not alone. The stories and history made in these estates are legendary.
At one time, there were tens of thousands of country houses owned by Britain’s noble families. The English countryside is still dotted with breathtaking architectural marvels punctuating sweeping landscapes, as well as smaller, more humble versions. Some are still homes to lords and ladies of the manor; others are grand museums, hotels, event spaces. Some are both.
All are fascinating windows into a history and lifestyle brought to life in countless favorite novels, TV series and films.
If you feel you were ‘to the manor born’, you’ll feel quite at home at the real ‘Downton Abbey’ and these three other, splendid examples of British stately homes that have been on the big and small screen.

The stately home at the end of a sweeping drive, framed by majestic ancient trees in the hero shots of every Downton Abbey show, is the real-life Highclere Castle in Berkshire (pictured, top).
The perfect proportions and striking Jacobean architectural style are enhanced by the surrounding gardens designed by maestro landscape architect ‘Capability’ Brown.
Rather than the fictional Crawley family, it’s been the real ‘seat’ of the Earls of Carnarvon since the 1600’s, with the current Earl and Countess still in residence today.
In addition to standing in as the Earl of Grantham’s ‘Downton Abbey’, Highclere Castle welcomes visitors through its now-famous front doors. So you really can wander through some of the rooms featured in Downton Abbey and imagine yourself at a dinner party, tea, or even a ball with the Crawleys.
Downton Abbey is not the first time Highclere has been at the centre of media attention and the public imagination. The 5th Earl of Carnarvon was involved in the discovery of the epic riches of the Tomb of Tutankhamun in Egypt in 1922. When he ‘mysteriously’ died a short time later, it fueled tabloid stories of the ‘Curse of King Tut’. He actually died of blood poisoning from an infected insect bite, so visit Highclere Castle without fear of ancient curses lingering today! 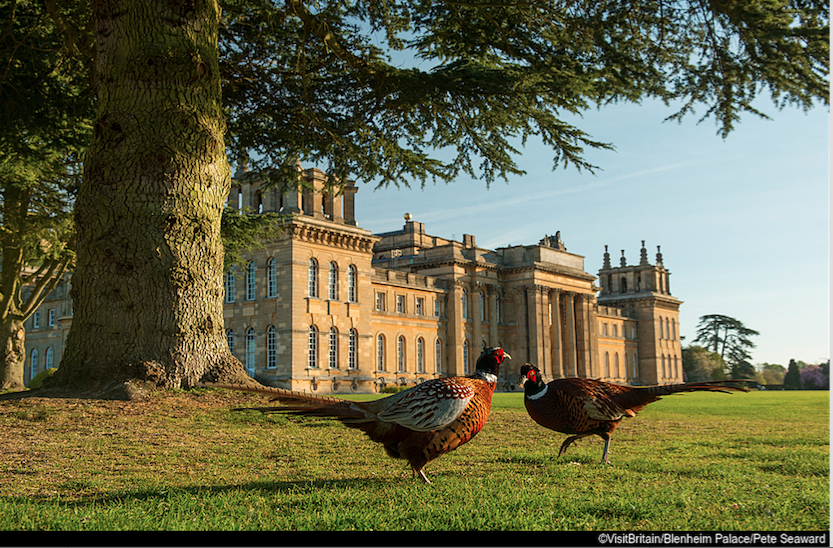 Anyone with an interest in English or WW2 history must put Blenheim Palace on their travel bucket list.
The sprawling, rare example of English Baroque architecture is woven into British history. A grateful Queen Anne gave the land in Oxfordshire, an immense sum of money, and the highest non-royal title, 1st Duke of Marlborough, to the victor for Britain in the War of Spanish Succession at the beginning of the 1700’s. It’s the only non-royal and non-Church country house bearing the name ‘Palace’.
The descendents of that 1st Duke of Marlborough, John Churchill, have eclipsed his fame and impact on world history. It was at Blenheim Palace that Winston Churchill was born, and the name of the Marlborough family now is Spencer-Churchill, related to Lady Diana Spencer, who became Princess of Wales.
Blenheim Palace and its 2000-acre signature gardens by the very busy Capability Brown have even been named a UNESCO World Heritage Site. The vast country house continues to be the home of the Dukes of Marlborough.
Film fans recognize Blenheim Palace from scenes in wildly diverse films including Transformers: The Last Knight, James Bond’s Spectre, MIssion Impossible: Rogue Nation, Harry Potter and the Order of the Phoenix, The Young Victoria, and even the TV show the Amazing Race. 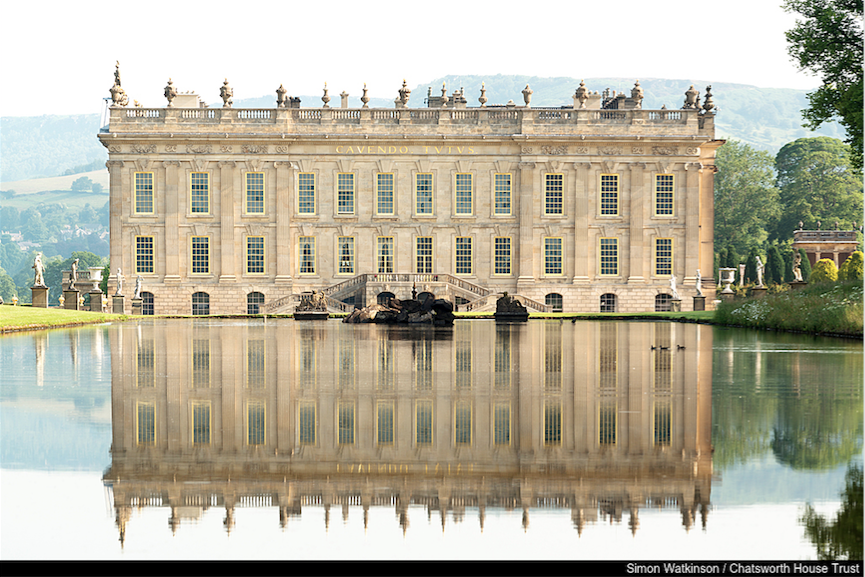 You catch your breath the first time you see Chatsworth House, the seat of the Dukes of Devonshire since the 1500’s. It’s regularly voted Britain’s favorite country house, and it’s easy to see why. Built on the banks of a river, surrounded by exquisite parkland and backed by wooded, rocky hills, it’s a stunning building in a dramatic setting.
16 generations of the Cavendish family have been born and died at Chatsworth, including recent generations. The recently-deceased Dowager Duchess was one of the famed Mitford sisters (that included renowned novelist Nancy Mitford), the upper-class ‘Kardashians’ of their day.
Chatsworth House today still houses a remarkable collection of paintings, Old Master works, neoclassical sculpture, books and artefacts.
If it looks familiar, Chatsworth too has been the real-life setting for famous fiction. It was named in the original 1813 novel Pride and Prejudice as one of the estates Elizabeth Bennet visits before arriving at Mr. Darcy’s home Pemberley; and that fiction came full circle as Chatsworth stood in as fictional Pemberley itself in the 2005 movie adaptation of the novel starring Keira Knightley. Another Knightley film, The Duchess, was filmed at Chatsworth, as were scenes of The Crown. 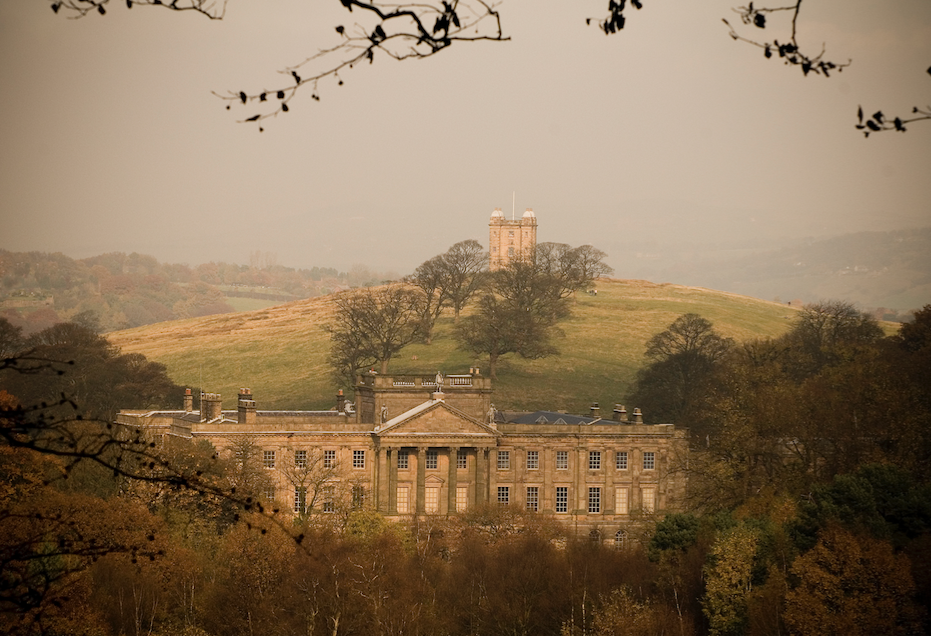 Lyme Park has the largest house in Cheshire, and it’s the only property on this list that is not still used as a family home. It was handed over to Britain’s National Trust, which preserves its history, architecture, and park lands for the public to appreciate and enjoy.
From the 1300's until after the Second World War, the estate was owned by the Leghs of Lyme, with the house dating back to the late 1600’s, and including both Palladian and Baroque styles. The lavish house interiors reflect its Regency-era rejuvenation.
In addition to the mansion, Lyme Park is famous for its tree-lined avenues, formal gardens and park with an immense herd of red deer dating back to the 14th century. The views are tremendous, and include a building called ‘The Cage’ on a nearby hilltop that was originally a hunting lodge and later became a park-keeper’s cottage and prisoner lockup.
Fans of British period dramas will also recognize the reflecting lake as the setting of the famous scene where Mr. Darcy met Miss Bennet in the BBC production of ‘Pride and Prejudice’.

Copyright BestTrip.TV/Influence Entertainment Group Inc or Rights Holder. All rights reserved. You are welcome to share this material from this page, but it may not be published, broadcast, rewritten or redistributed.